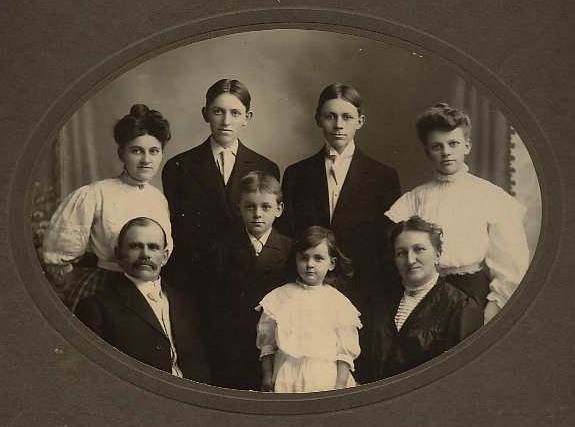 
Victor and Hannah Anderson came to the United States in 1886.  They lived in Chicago for fifteen years.  Five of their six children were born in Chicago.  In 1901 they bought a peach farm near Pomona, Missouri.  They lived on the peach farm for only half a year and then moved to Des Moines, Iowa.  Their sixth child was born in Des Moines.  In 1911 they moved to a farm north of Pine Bluffs, Wyoming.  About 1915 they moved to Mount Vernon, Washington.  However, they were unable to find a suitable farm there and returned to their farm in Wyoming a year later.  Hannah died in 1921.  About 1924 Victor moved to San Diego where two of his children were living.  He died in San Diego in 1940.  The youngest boy, Reuben, took over the Wyoming farm and remained there the rest of his life.  Esther married and moved to Seattle, Washington.  Ruth married and returned to the Chicago area.  Elam lived in China from 1917 to 1932, then in McMinnville, Oregon and Redlands, California.  Lawrence moved to San Diego about 1924, and Delight soon followed him.  Victor joined them a short time later.

The descendants of Victor and Hannah are now in the sixth generation.  They number 303 at last count, and live in every part of the United States, plus a few overseas.  New in this iteration of the website is a table giving the number of descendants in each generation.  The Family Tree was last fully updated in 2013.  Some, but not all, parts of the Tree have been updated since then, and the number 303 includes those additions.  Any updates you care to provide will be gratefully received.  It is quite likely we are well into the the seventh generation by now, and your help in confirming that would be appreciated.  Check your pages in the Family Tree (next section) and send updates to the email address at the bottom of this page.  Thanks so much for your help!

The Anderson Family Tree
New here is a copy of the birth record from Victor and Hannah's family Bible.  It records the names of Victor and Hannah's children given at the time of their birth.  It seems that Lawrence as born as Carl Lawrenze and Reuben as Viktor Reuben.  Both men reversed the order of their first two names.  But then, Victor was born Karl Viktor, so maybe it was quite acceptable in his family.

Anders Fasth, Swedish soldier, and Victor's father
In 1682 Sweden established an Allotment System to establish and maintain a standing army.  Anders was among the 1200 soldiers who served in the Army Regiment based in Jonkiping Province.  Victor mentions this only a few times, but it was an important part of his life.  Here is some information about the system, how it worked, and some of the ways in which it would have affected Victor's family.

Andersons in the Wyoming Legislature
Five Andersons have served in the Legislature, including one in the fifth Anderson generation.

Biographies and other Writings of and about the Andersons
There are biographies here of all the first three generations of the Andersons in the US, twenty five in all.  Most of them were written in 1984 and are brief one-page biographies and autobiographies.  In a few cases, longer biographical memoirs have been linked to the brief ones.
Elam Jr died December, 2014.  An obituary, a eulogy, and a memorial from his memorial service have been included here.
New here is a biography of Elam and Colena Anderson, written by Colena.  It begins with their meeting at Cornell University in 1913 and goes through the aftermath of Elam' death in 1944.  It is available here both as a PDF of the original, and as the text only.
New also is Gordon Bjork's autobiography as well as a memoir / appreciation of Vic Anderson and his times, written by his daughter, Mary Anderson.

The Andersons in Chicago
When they came to the United States, Victor and Hannah settled first in Chicago.  They lived there from 1886 to 1901, and five of their six children were born there.

The Andersons in Missouri
The family moved to southern Missouri in 1901.  They were there for only six months, and moved from there to Des Moines, Iowa.


This website aims to tell the story of one immigrant couple and their descendants.   Corrections and additional information about items on the website as well as additional photos and biographical or other information will be gratefully accepted.  To email the editor / webmaster, please click on the link below

Contact Information
Please send news of births, deaths, marriages and other evidences of a very lively family to Dwight Ericsson.