[In Chicago we] rented a six room new brick house.  We then went to a second hand furniture store and bought the most necessary furniture.  We only had $75.00 in our pocketbook when we arrived in Chicago and that is not much to buy furniture and necessities for a six-room house, although $75.00 went a long ways at that time.  We paid $16 a month for rent.  We took in four young men to room and board with us and in a few days I started carpenter work, receiving $1.50 for a nine hour day.

I worked all summer and part of the winter so we got along well.  My wife earned as much as I did.  We kept on this way for three years.  Then I was earning $2.50 and sometimes $2.80 per day.  At this time we were the proud parents of two daughters.  My wife now gave up keeping boarders and we moved to a suburb called Lake View, where we rented a three room flat for $8.00 a month.  At the end of another year we had a bank account of $600.00 and then my wife inherited $300.00 from her parents.  With this we purchased a lot in Lake View on Osgood St. (then called Baxter St).  I built a two flat building (frame) on the back of this lot.  There were four rooms in each flat and we rented the second flat, living in the first flat ourselves.  Here we lived comfortably for ten years.  I was nearly always busy at my carpenter work, doing contract work and making my own plans.

During this time I built a three flat brick building in the front.  Each flat had five rooms and bath, modern in every way.  At this time I helped in the building of the new and present Swedish Baptist Church in Lake View on the corner of Barry and Clifton Streets.

Lake View was becoming very closely settled, so we traded this place for a home in the beautiful suburb of Rodgers Park, three blocks from the lake on Estes Ave., and remodeled this place somewhat.  This property was on the beautiful corner of Estes and Perry Aves.  This was shortly after the World’s Fair, which was followed by a never forgotten depression, and it was then impossible at that time to get work of any kind.  I had been suffering for several years with catarrh and dyspepsia and decided it would be best to try a change of climate, so we traded this property for a farm in the southern part of Missouri, near a town called Olden.


On a visit to Chicago in July 2012, my wife and I were able to locate most of the places mentioned by Victor in the Chicago section of his autobiography. 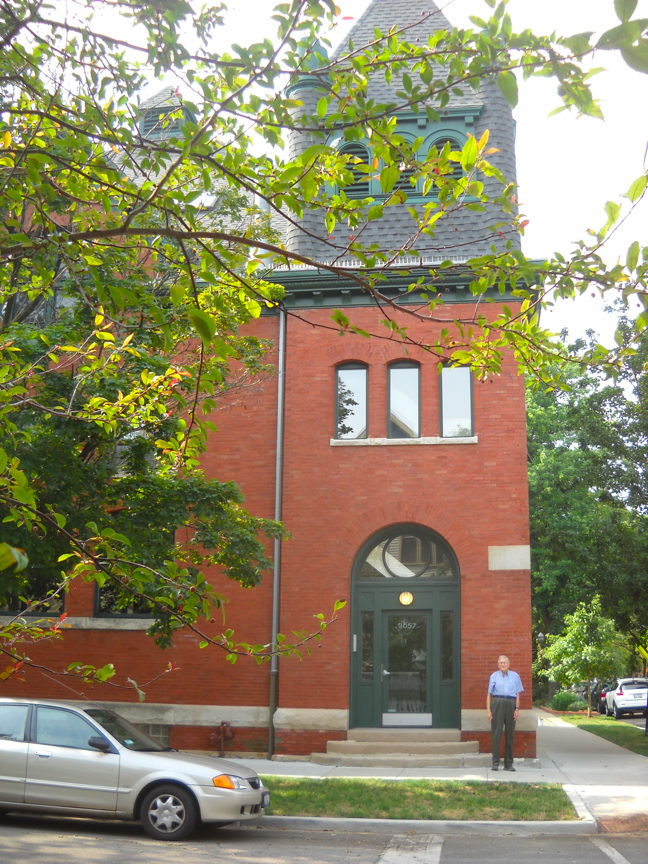 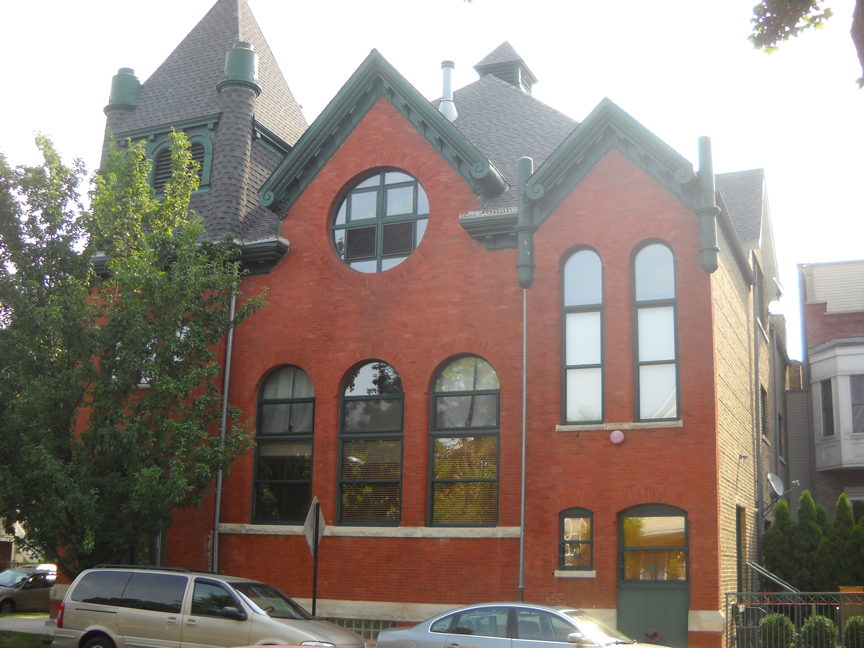 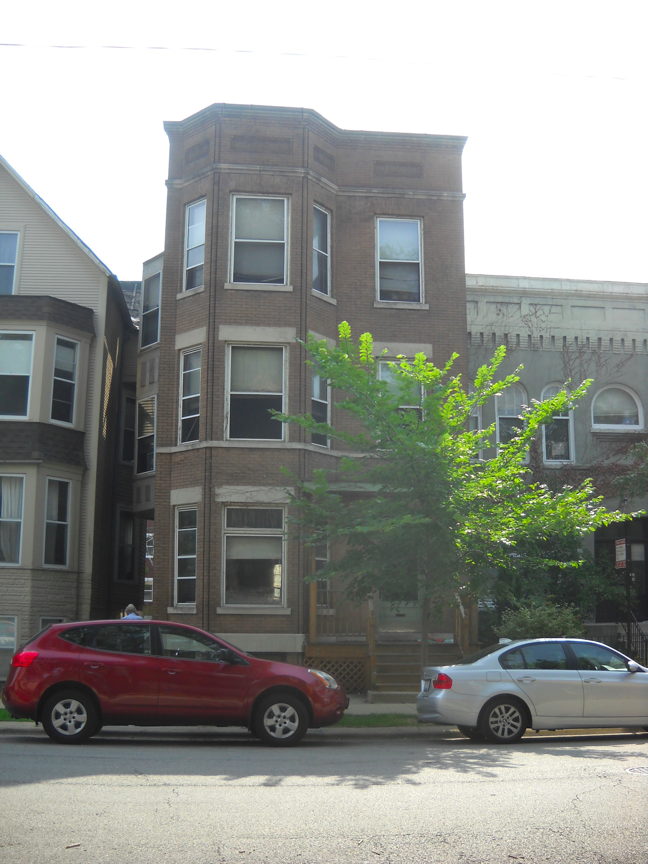 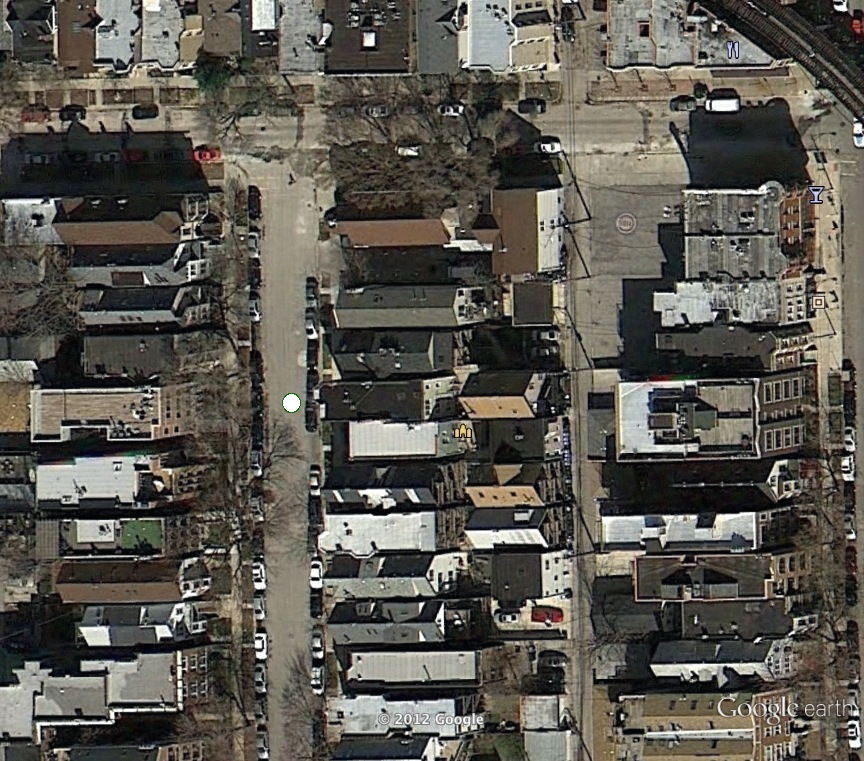 On the left is the apartment building which Victor built on the front of his lot.  He says in his autobiography that it was on Osgood Street.  However, many streets have been renamed as well as renumbered, and the address now is 3349 Kenmore Street, in the Lakeview district of Chicago.  On the right is an aerial view of the neighborhood, courtesy of Google Earth.  Victor's building is near the center of the picture, marked by the white circle in the street.  He says that toward the end of the 1890s "Lake View was becoming very closely settled."  This picture shows how "closely settled" the neighborhood became. 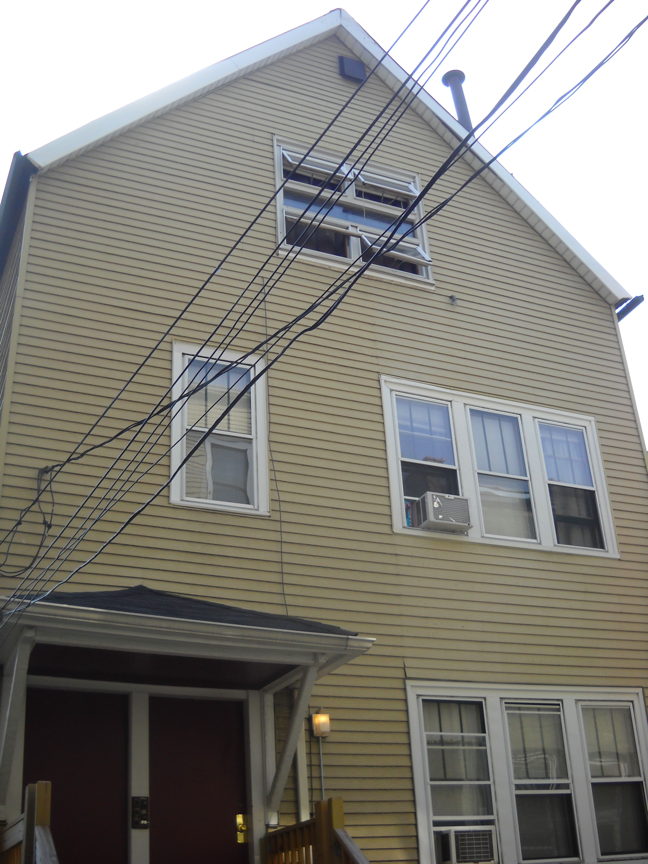 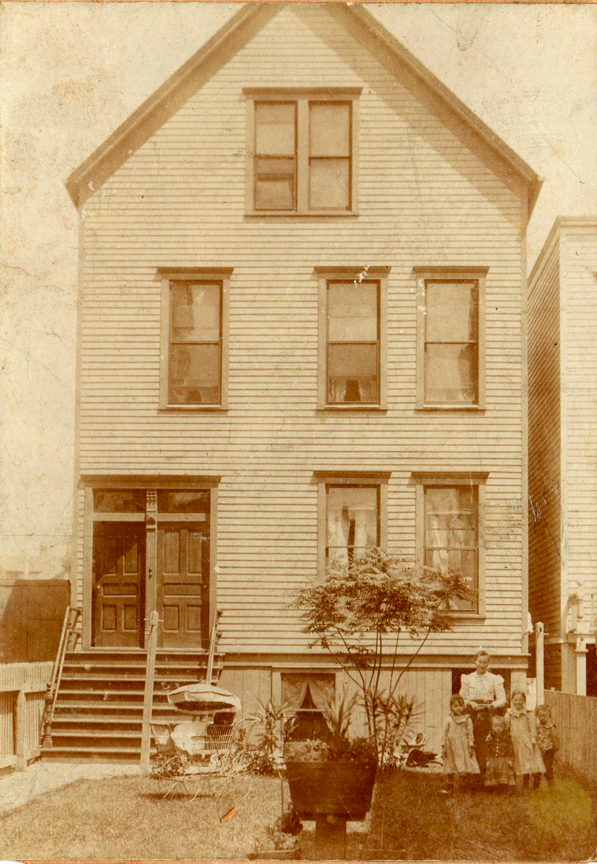 Victor writes in his autobiography that, before he built the apartments, he built a house for his family on the back of the lot.  There is, indeed, a frame house behind the apartment building, shown in the photo on the left above.  I am fortunate to have a photo that was taken during the time Victor and Hannah lived on Osgood Street.  The moment I saw the house behind the apartment building, I knew I was in the right place. There can be little doubt that the house at the back of 3349 Kenmore Street is the house Victor built for his family.  The photo on the right was taken about 1895.  Hannah and family are in the lower right corner of the photo, and the children, from left to right, are Ruth, Lawrence (in a dress), Esther and Elam.  The house in back / apartments in front arrangement was used frequently in this neighborhood, as can be seen in the Google Earth view above.  Most of the nearby lots have both buildings.  I could not get as much of the house into the current photo as is shown in the old photo because there is no longer space enough between the two buildings for a more complete photo. 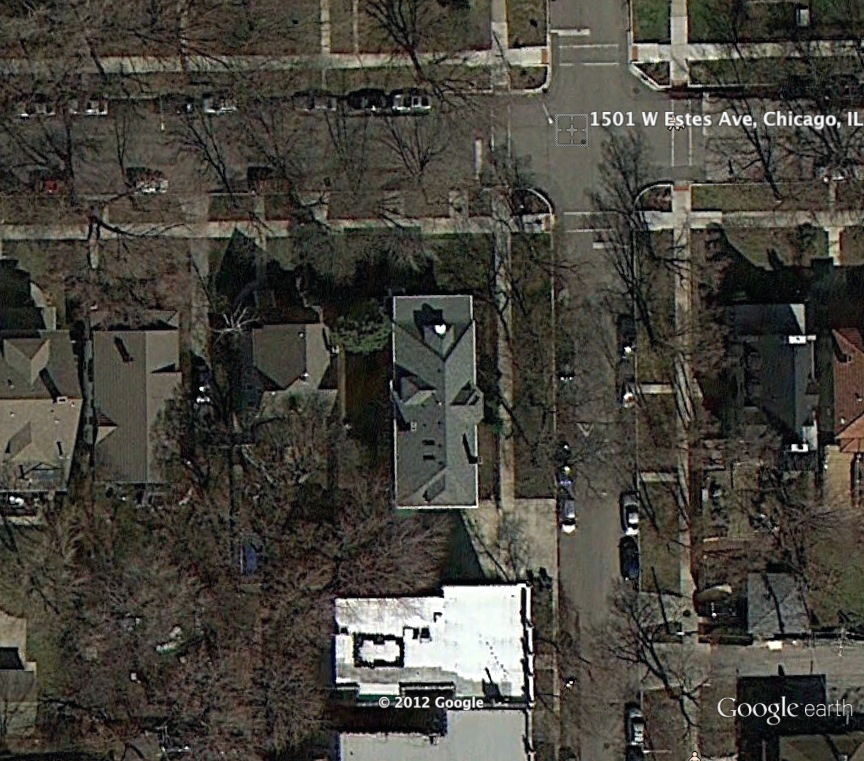 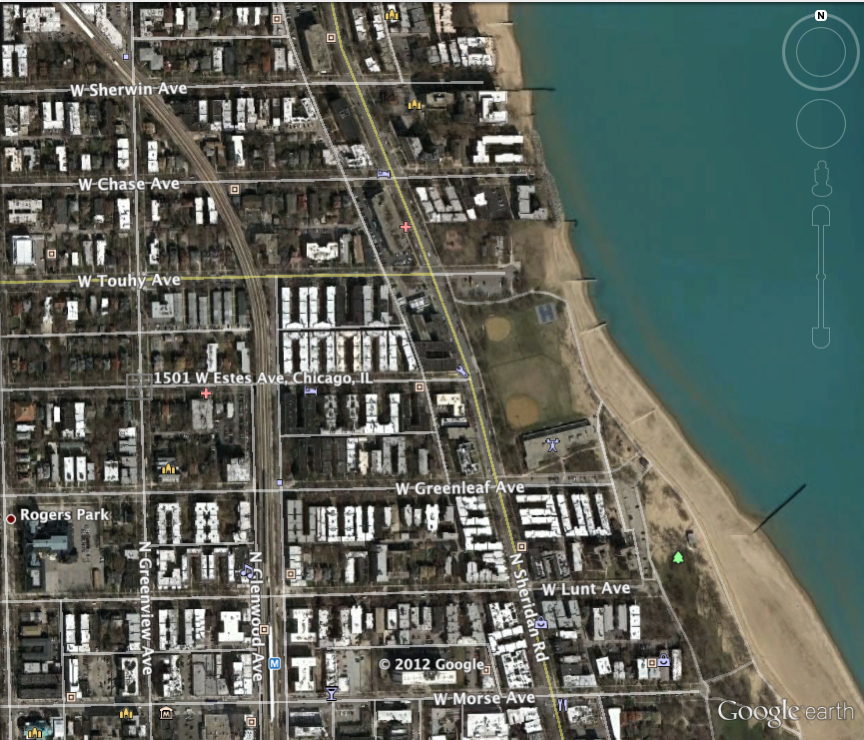 In the late 1890s the Andersons moved north to Rogers Park.  We looked for Victor and Hannah's house in Rogers Park but we did not have a current address for it (all street addresses were changed in 1909) and the number we had, 941 Estes Avenue, no longer exists.   We did drive down the street and found it a pleasant suburban street with modest single family dwellings for the most part.  Later, we learned that the current address is 1501 Estes Avenue.  The photos above were taken from Google Earth.  The house is near the center of the left picture.  It is long and narrow and has a dark grey roof with four dormers.  Victor says he was three blocks from the lake, and the picture on the right shows that.  "1501 Estes Ave." appears at the center of this picture, and the house is on the southwest corner of the intersection nearest "1501."


The map below will give you an orientation to Chicago and to the location of these places in Chicago. 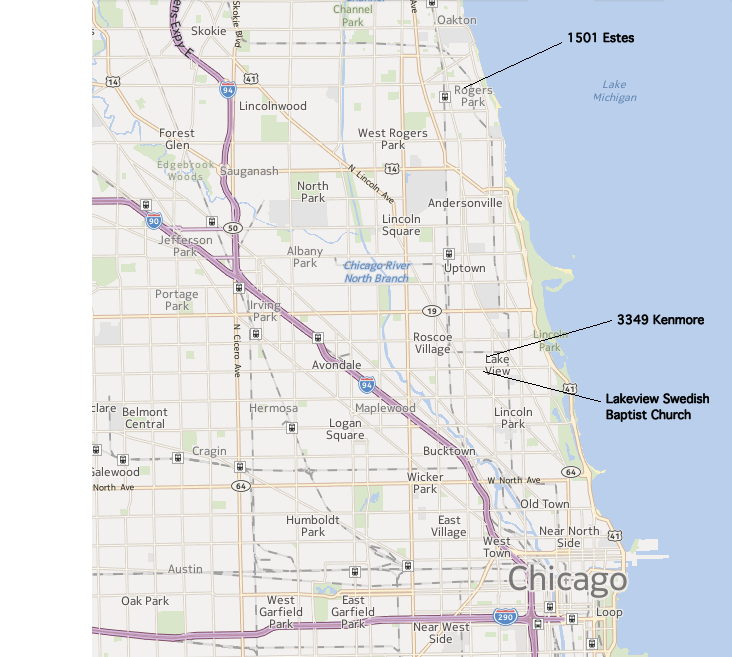