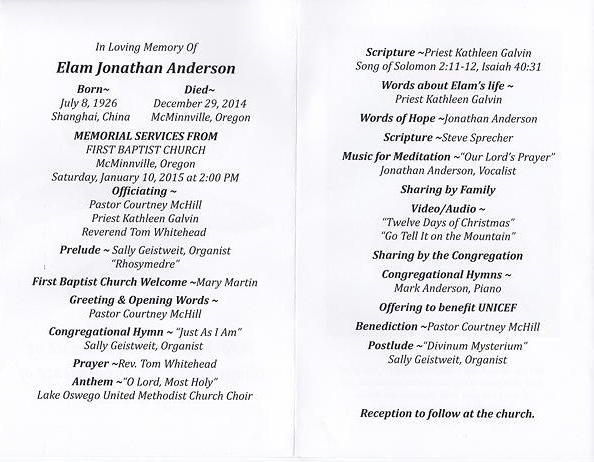 
The following is a memorial to Elam sent by his niece, Mary Anderson


Elam was the young, enthusiastically compassionate and mildly zany Uncle Elam of  my childhood.

He is the guy who responded to my scream of disgust at seeing a spider with ‘But Mary, that is a creature of God!’

He is the college student who doggedly followed his older brother into the physics  department at the University of Redlands only to leave physics to follow a call to the Christian ministry. ‘

He is the young minister who joined predawn vigils of paciﬁsts at Vandenberg Air Force Base during the arms race of the 1950s.

He is the older wiser minister who cut through the confusion and chaos of my early marriage plans. Having relented to pleas to ofﬁciate the marriage of his distant niece, he nevertheless insisted on a last ditch premarital counseling session the day before the wedding. One of his questions elicited an unexpected response from my fiance that opened my eyes to problems ahead. Alas, I quickly shut them! The wedding went off as planned.

So in spring when I look out the bedroom window to see slender cables of spider silk dancing in the morning light I will utter a prayer of thanks for the uncle who pointed out the beauty, strength and grace of the spider and who taught me the wisdom of posing queries to my children.